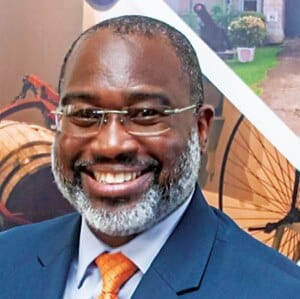 Mr. Farmer brings to the organization a wealth of managerial and development funding experience to the post. He is presently the Deputy Director of the Barbados Museum and holds a Master’s degree in History (Heritage Studies) from the University of the West Indies Cave Hill Campus. His responsibilities at the museum have included capital campaign fundraising projects over the past decade, that has secured funds for the development of a multipurpose open-air theatre, redevelopment of a Children’s Gallery, and community engagement activities.

Prior to joining the Museum as its Deputy Director in 2011, he was a lecturer in Archaeology in the UWI, Department of History at the St Augustine Campus (2010-2011). This was followed by lecturing at the UWI, Cave Hill Campus in their MA Heritage Studies programme from 2011 to 2014.

In addition to his current position, Mr. Farmer is the Chairman of the Development Committee of the Codrington College with responsibility of providing guidance and governance for the sustainability of the College and its estate. A position he has held for over four years.

He is also the co-editor of the publication entitled Plantation to Nation Caribbean Museums and National Identity along with other articles on the cultural resource management of Barbados, historical archaeology, and future of heritage development in small island developing states. He has previously served on the executive of the Museums Association of the Caribbean and the International Association of Caribbean Archaeology and is a regional expert in the UNESCO Conventions on Illicit Traffic in Cultural Property and the Protection of Cultural Property in the Event of Armed Conflict.

The new president stated that he “is committed to the HSFB and intends to continue the work started over the last 35 years.” His interest in the Heart and Stroke Foundation is based on a personal experience. He has high regard for their rehabilitation programs and advocacy on the prevention of cardio-vascular disease and childhood obesity. His plans include strengthening HSFB’s engagement with its stakeholders, including those who have benefited from the care provided by the Foundation, while growing the core pillars of Advocacy, Engagement, Education, Rehabilitation and Sustainable development for the Foundation. In his initial address to members of the foundation he noted “…such work is a team effort and I look forward to working with the Board, CEO and Staff and Volunteers of the Foundation, our Governmental and NGO partners and funders to respond to local needs informed by evidence-based practice…” The HSFB welcomes Mr. Farmer to its Board and looks forward to our future successes.